to demonstrate the love of God through Jesus Christ by caring for the least of these within our community.

Our vision is to welcome all people into the community of Christ and love them well.

What does worshiping as a Christian community mean to us?

…is an acknowledgment of God’s supreme worth

. . . is a meeting between God and his people, where God becomes present to us

What does “Disciples in Longview” mean?

We are affiliated with the Disciples of Christ, an American-founded Protestant movement that began roughly 200 years ago on the American frontier.  We are the only Disciples-affiliated congregation in Cowlitz County, but we also believe in being “disciples,” as in followers of Christ, in all that we do…so for us, that name is very appropriate.  To learn more about our Disciples affiliation and what we as Disciples believe, click on the “Disciples of Christ” tab under the “About” menu at the top of the page.  We welcome all people, regardless of whether they have a Disciples background or not!

Can I bring my children with me? Do you have nursery care?

Yes, and yes!  We understand that church and worship can be difficult sometimes for small children, especially in an unfamiliar setting, and so we take special care to minister to our children.  We offer a storytime for children during worship, after which children between the ages of six to ten are invited to go to church school for a special, kid-friendly worship led by our dedicated volunteer teachers.  We understand that some children may struggle with things like separation anxiety, so you are also welcome to keep your children with you as you worship! For children who remain with their parents in the sanctuary, we offer quiet children’s activities such as coloring books and children’s Bibles.  We offer nursery care for children under the age of five, and we always have at least two attendants on duty in our nursery.

What opportunities are there for fellowship and mission?

Lots!  There is something happening at FCC almost every day of the week.  To learn more about our various ministries, activities, programs, and outreach efforts, please click on the “Ministries” tab on the menu at the top of the page.

What if I haven't gone to church in a long time, or ever?

That’s okay!  We try very hard ensure that all people, regardless of their previous church experience, can feel welcomed and uplifted by our worship.  Standing (or even jumping up and down for that matter) is optional for all of our praise songs, all of the lyrics on our PowerPoint, and our entire order of worship fits on one-half of one 8.5 x 11″ bulletin.  And if all else fails, please do not be afraid to ask someone for help in following along!

Can I participate in holy communion during your worship?

Absolutely!  Part of our doctrine as a Disciples of Christ congregation is that anyone who believes in Jesus Christ as the Son of God is welcome to partake in weekly communion.  We use grape juice and gluten-free wafers as our elements so that all may participate in this sacred meal.

Most Sundays, worship is led by our house praise team, Joyful Noyz.  Their music generally utilizes guitar, bass, keyboards, percussion, and occasionally other instruments like the banjo and ukulele.  Our music comes from a blend of traditions and influences, and is played in a manner that is both uplifting and prayerful.

Can women serve in church leadership?

Yes.  We have female elders, deacons, teachers, and board members.

Do you take specific stances on political issues?

Generally, no.  Though we strive to have Scripture inform and influence our opinions, we are also a politically diverse congregation, and that diversity is actually a very strong fabric of our identity.  We believe that the mission of the church in spreading the Good News of Jesus Christ and caring for the poor and the outcast should transcend political boundaries, and we believe in the church as a safe space to discern what it is we should believe about current issues without fear of judgment or hate.  We expect that not everyone will agree with what we teach, but we hope that you will accept what we believe and teach.

What are the requirements for membership?

We ask only four things of people wishing to formally join our faith family:

-Belief in Jesus Christ as the Messiah, the Son of the living God as revealed in the Bible.

-Participation in a membership session, which includes a dialogue on the role of the church in the 21st century world, and on how the Disciples of Christ fits into that.

-A willingness to support the church and its stated mission and vision with your voluntary and sacrificial giving of time, finances, resources, and talents.

-If you have not been baptized in a previous church, baptism by immersion.

What does being a church member mean here?

It means that we as the church commit ourselves to:

Having leadership from a pastor(s) with proper ministerial standing (Acts 13:3)

Lovingly nurturing and caring for you in the name of Jesus Christ (John 13:34)

Assisting you in times of need and praying for you regularly (1 John 3:17)

Our congregation was established in 1928, and moved to its present location in 1931 on land donated by R.A. Long, a Disciple businessman and philanthropist who founded Longview. The congregation’s historic gothic-style building and location across from Lake Sacajawea has made it a favorite location for weddings and other special events.

In 1923, at the age of 73, businessman and philanthropist R.A. Long of Kansas City took a trip to the Northwest with a desire to expand his lumber interests. He chose to bring the Long-Bell Lumber Company along the Columbia River just west of Kelso, Washington. His “planned city” was modeled after the nation’s capital with a hub at the center just opposite of where the Monticello Hotel still operates. He brought many of his Kansas City employees with him and provided for them generously. His original vision of Longview was for a single “Community Church” to serve the religious needs of all his employees and their families. That church became what is now Longview Community Church.

Realizing that the vision of one church was not realistic, he donated the property at the corner of 20th and Kessler across from the man-made Lake Sacajawea. The group began meeting in 1928 but the present sanctuary building was not completed until 1931, making it just the third church sanctuary erected in Longview, after Longview Community Church and Longview Foursquare Church.  The first Sunday that FCC opened its doors, R.A. Long–a member of the Disciples of Christ himself–spoke from the pulpit.  Also at this time, Rev. Homer Wilson was called as the church’s pastor, a post he served until 1934.

In 1934–the year of R.A. Long’s death–Rev. Ray Dew became the pastor until his death in 1945, dying in his study from sudden cardiac arrest after a choir rehearsal. But his dream was to complete a recreation hall attached to the sanctuary, which became a reality the very same year, mere months after his death, and the recreation hall is dedicated to his memory. Following an interim ministry by Rev. Grant Cole, the church then called Rev. Dr. James E. Whitaker who served the church as the senior pastor from 1946-1972, during which time the Christian Education/Chapel building adjacent to our historic sanctuary was built.

Throughout the 20th century, First Christian Church kept a strong Christian presence in the Longview-Kelso community and has most recently benefited from the pastoral leadership of Rev. Eric Atcheson from 2011-2018.  Other previous pastors include Rev. Ron Naff,  1995-2010 and Rev. Dr. Tom Yates 1987-1993.   Currently we are using a variety of local pastors and/or seminary students as pastors while we are in discernment and transition.

In our time together as a faith community, we have built buildings, asked questions, sought answers, and performed ministry.  We are now seeking big answers to the big, 21st century questions about God, faith, religion, and spirituality.  If ever you are thinking about exploring your faith in a community of fellow seekers, know that here you will be welcomed with open hearts and open arms. 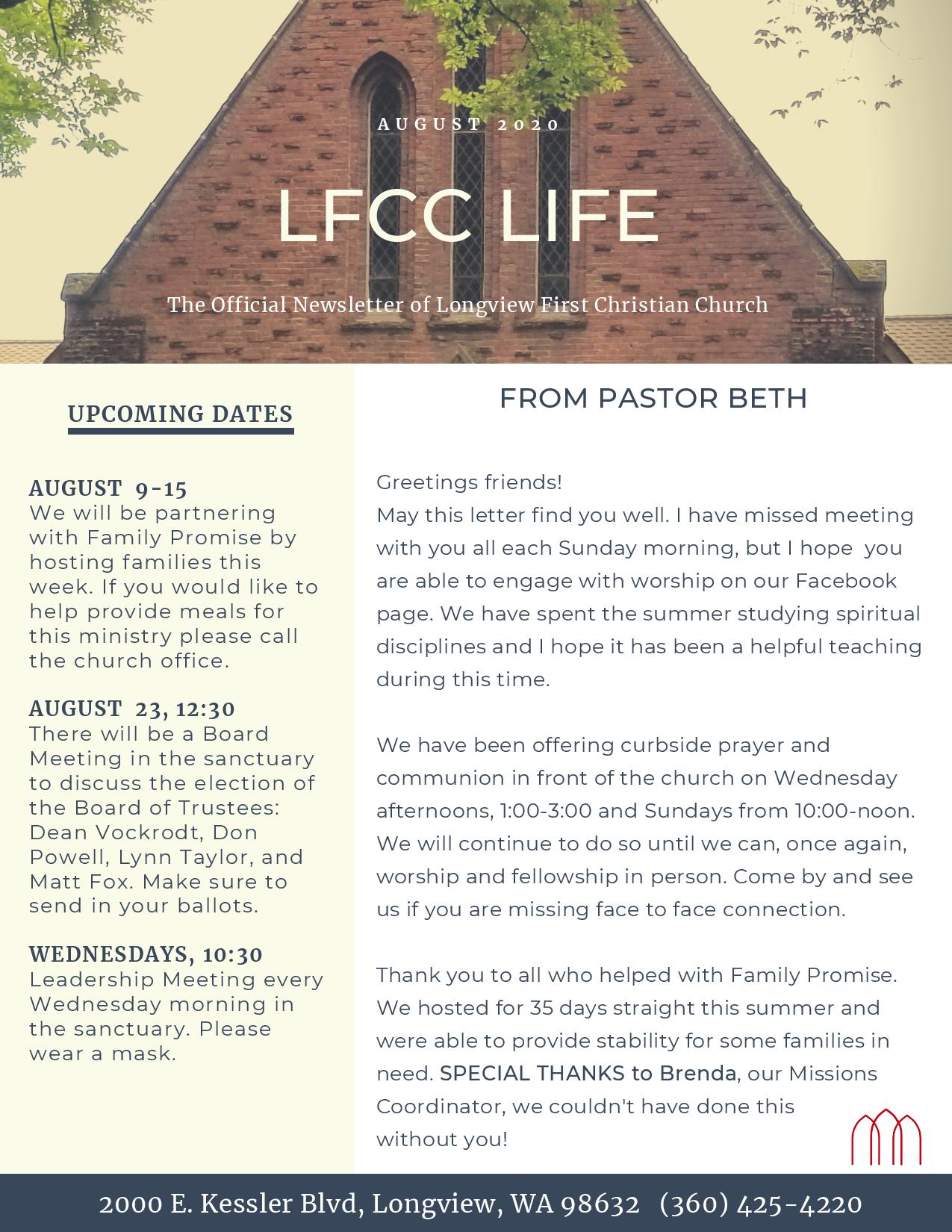 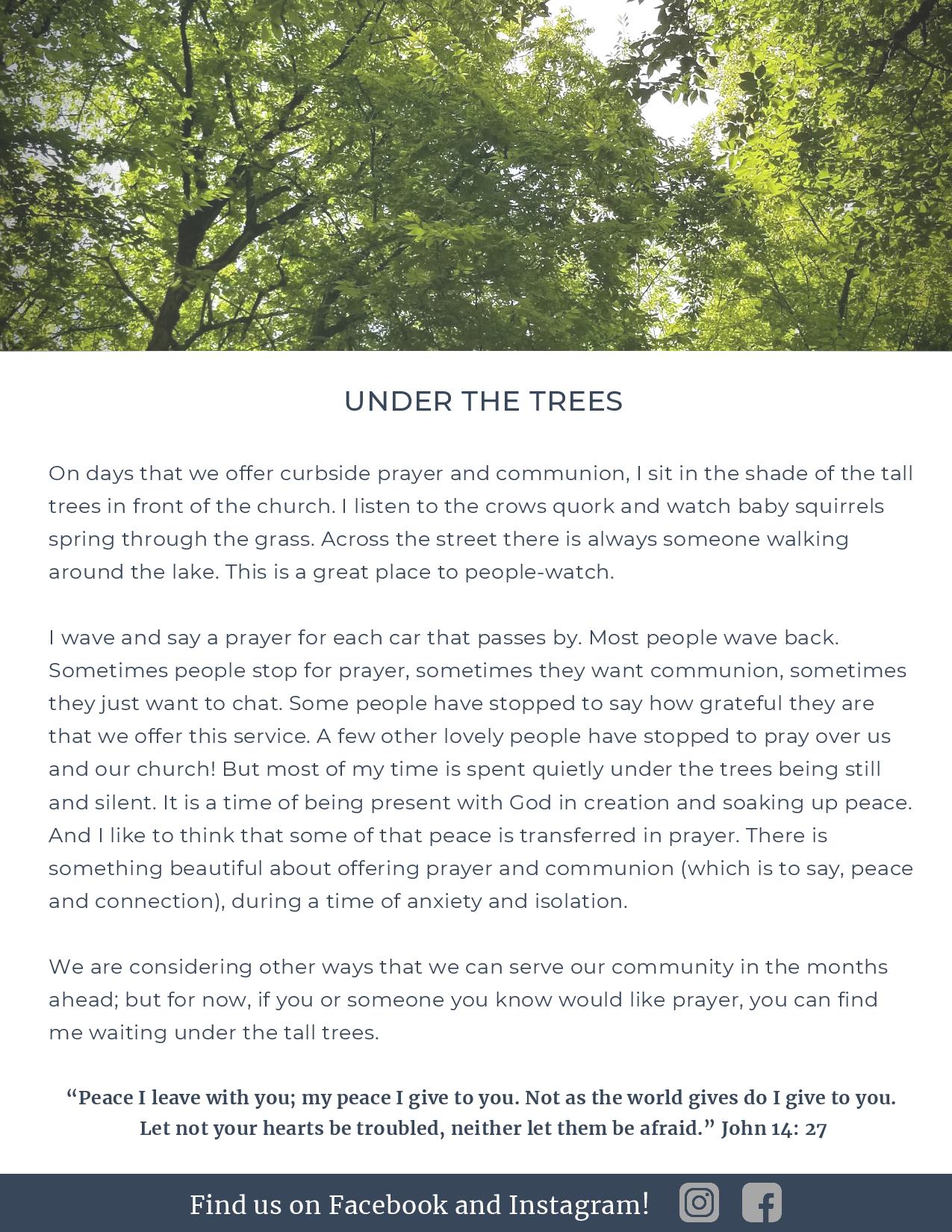 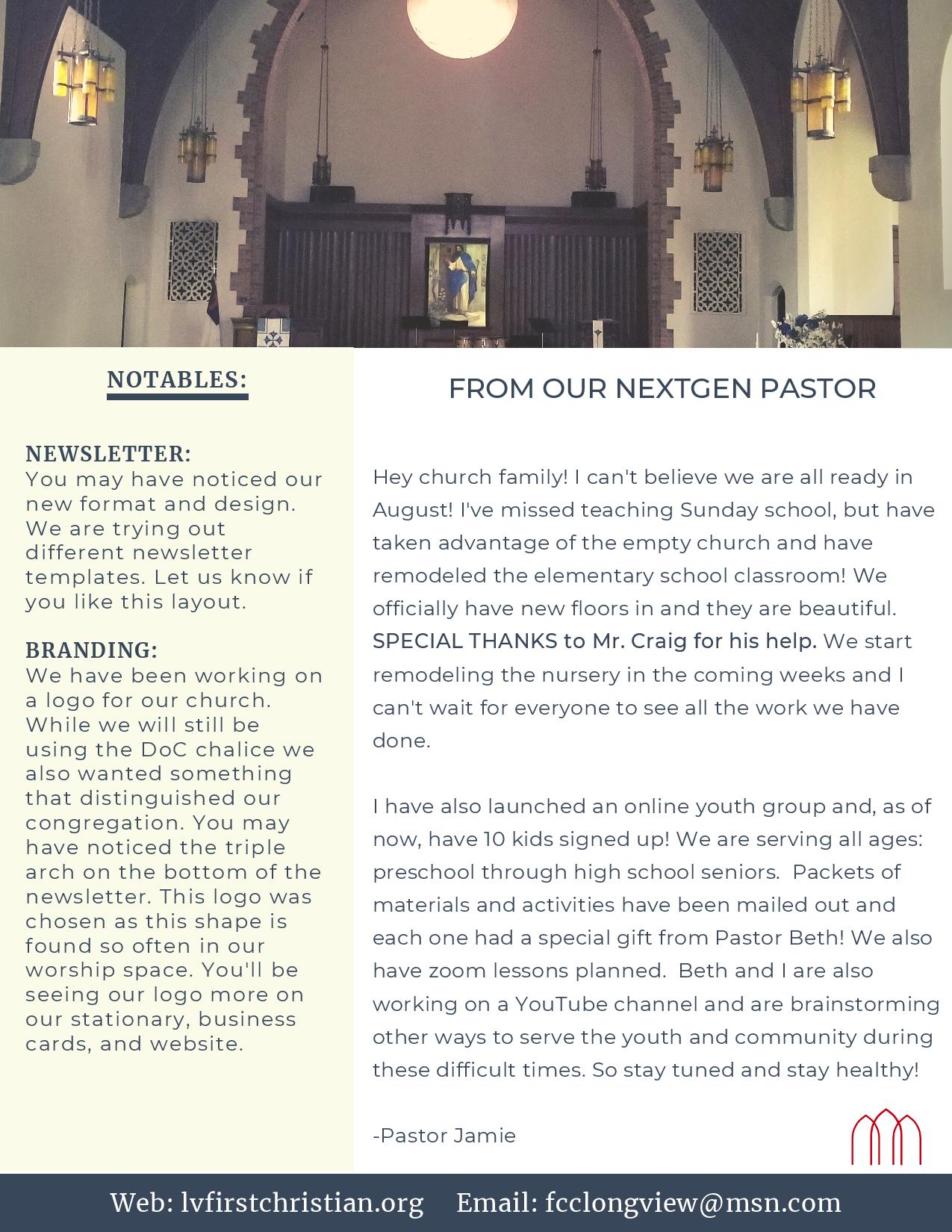